Who is Nina Jin Zhou? To me, she the was closest I’ve ever been to another human being. My classmate, my rival, my confidant, my cheer leader. My partner of 7 years, my housemate for 5, the best friend I ever had. She was the great love of my short life.. and I hers. Our relationship wasn’t perfect but I knew there would always be an unbreakable bond between us. Now the most I can do.. the most any of us can do is remember her and honour her. For my part, I want the world to know how much of an awesome girl she really was.

A year ago, today, the 19th of September 2013, she died while adventuring in Nepal. She had been on a three month long adventure spanning the breadth of Asia, Nepal being the final stop. She had just finished her Masters in Statistics and had quit her permanent job at Macquarie University. The plan was to take a bit of a break before taking up a post as an Australian Youth Ambassador in Mongolia. She was only 27 when she died. 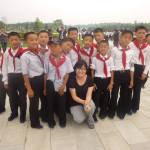 Nina hanging out with some North Korean school kids. (Yes, in North Korea) circa 2013 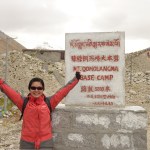 Arrived at Qomolangma Base Camp. Circa 2013. 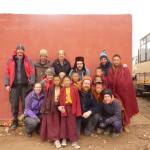 Nina posing with other tourists and some Tibetan monks. Somewhere in Tibet. Circa 2013

We met at uni in the 2nd year computer architecture class. Lucky for me she skipped a year at school (starting uni at 16) and I got held back for failing a MATH subject. I annoyed her with a stupid answer about code emulators for SPARC CPU’s.. don’t remember what exactly. Next thing we knew, we were executives in Mac Uni Comp Soc (MUCS). She was the president, I was her deputy. We were basically married from that point on.

Speaking of marriage, some of our friends are actually married now. One complains about how he can’t bring his Gundams to the marital household because of objections by the missus. Well, Nina actually built Gundams. Not just High Grade stuff.. I’m talkin full on, hardcore, Master Grade, with the internal skeletons and the little dudes inside. I couldn’t keep up with her. She had a few of them lining her office table. We actually started work on a Perfect Grade. I haven’t worked on it since she left.. 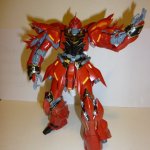 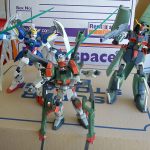 Another friend complains that he can’t play games as much since getting married. Welp, Nina was a huge gamer. We used to rip up the streets of Tristram with her level 60 barbarian in Diablo 3. She’d keep me up while she played Persona on her PS Vita till late. Professor Layton on her DS. We used to battle it out in Advanced Wars on her GBA SP. She introduced me to Fire Emblem and Alex Kidd. 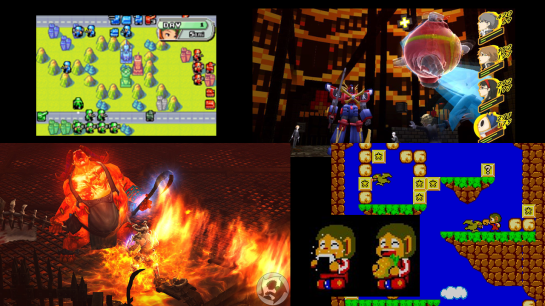 She introduced me to a lot of things. Classy restaurants in the city. Live music. Skydiving. 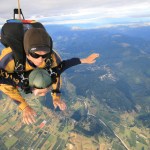 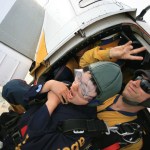 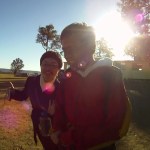 Nina sending me on a surprise skydive

Yep, Skydiving. How did she do it? She woke me up really early one morning, telling me she’d signed me up for one of them bootcamp courses. There I was grumbling about what a terrible idea it was, not knowing what was really going on. Next thing I knew, I had a big burly skydiving instructor strapped on my back, encouraging me to jump off a perfectly good aeroplane. She had gone skydiving a few weeks before when she was volunteering in New Zealand. She just wanted me to have the same experience.

We’ve had some great adventures together. Climbing mount Wellington in Hobart, camping along the Hawkesbury to Cowan trail, (somewhat) following Frodo’s trail in New Zealand, walked the wild streets of Manila, got upstaged by little kids in the Threadbo snowfields, rocked it with Spongebob and Patrick.. Moved into 3 different places to play grownups. Raised a family of stuffed toys, a SmartCar and a rabbit. 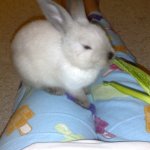 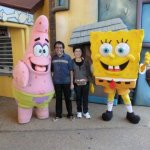 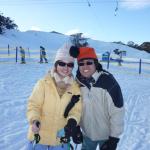 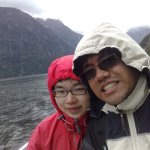 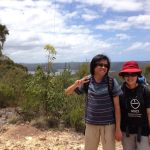 I miss her terribly. A kind of longing that I never thought possible before. Not a day goes by where I don’t think of her. Working at the university where we met. Teaching in the very rooms where we ourselves sat as undergrads together. I miss her voice, her messages on Facebook and Google chat, her admonishments when I did stupid things. I miss our childish games, the Korean boyband music that would blare out of her room. I wish we could have screamed at the screen together as Matt Smith played his final scene as The Doctor. I wish she could have known how awesome Guardians of the Galaxy turned out to be…

Back in April, Macquarie University gave Nina official honours in recognition of her academic achievement as a student and her service as a staff member. She started working for the uni in her first year of study! She’s got 3 degrees! Can you believe this girl?

We planted a tree in her honour, just behind the old library. Nina and I used to notice little plaques around the grounds, commemorating MQ community members who have passed on. Now she has one herself. We will never forget her. But I will always regret all her lost potential and all the great things she can no longer do. I am comforted that we, her family, friends and colleagues can celebrate her life and achievements. 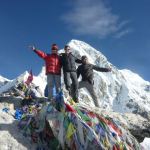 Nina at Everest base camp, in view of the great peak itself. Circa 2012. 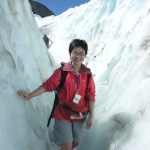 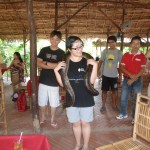