Hours and hours of our lives are wasted just commuting to and from places. Its being stuck in traffic in your car or in the bus. Its waiting for your train to arrive, or tolerating constant stops to pick up and let off passengers. Skyrail is my proposed solution. Its a point-to point transport system that combines the freedom of normal roads and the flexibility of overhead cable cars. Check out this YouTube vid! The core of this system is a junction system which allows pods to change direction at will. Traditional rail systems reconfigure the rails to allow trains to change direction. With my system, the pods themselves decide where they want to go. The rails don’t change. They’re like packets travelling through the internet. 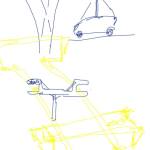 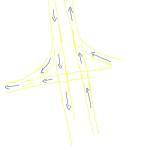 “Freeway” system, with no stopping at intersections. 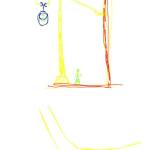 Urban installation concept. Could be seamlessly installed with existing infrastructure.

As I said in the video, I’m not a “real” engineer. I’m just a programmer. So I’ve rigged up this Unity based physics simulation to demonstrate that this structure is actually physically viable.

If you’re one of those “real” engineers (mechanical, civil, aerospace, mechatronic, etc) and think this project has legs, please let me know (at matt@squarestorm.com). I wanna make a physical mockup to further prove and refine the concept. I really think something like this could end the scourge of traffic congestion forever!